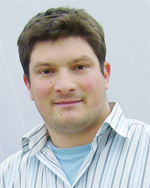 Since successfully earning his masters degree at the FHTW Berlin in September 2007, Jochen Link is working as a research associate at the Fraunhofer Institute for Solar Energy Systems (ISE). In his PhD, which is presented below, he is going to use synergies of applied research with practical components at the ISE and independently financed research by the RL foundation. The main focus is going to be on management and system regulation of different sustainable energy converters and storage systems. During the bachelor's and master's studies of "Renewable Energy Systems" Jochen Link volunteered for different working groups which were engaged in environmental and energy politics. The active attendance at conferences, skill enhancements and seminars in different countries (e.g. the attendance at the United Nations Climate Change Convention in 2005 in Montreal) allowed him to consolidate his professional knowledge and to broaden his horizon. Due to his practical background, which results from his apprenticeship as a carpenter and one year as a journeyman, practical applications of his theoretical projects have always been important to him. For example the solar yield simulation, which he developed for a Chinese solar cell manufacturer during his bachelor thesis in China in 2005, is still in use. The results of his master thesis of September 2007 did not only lead to local electricity savings at the Fraunhofer ISE but are furthermore being used in several other projects at the institute. The optimized integration of renewable energies in the energy structure is in Jochen's opinion one of the main tasks for a sustainable energy supply.

optimized operation of grid connected vehicles". To reach significant CO2 emission reduction with electric vehicles, electricity production based on renewable energies is required. The aim of this study is to determine different options for linking the charging times of electric vehicles with fluctuating local renewable energy production. Energy demand profiles for electric cars were generated on the basis of statistic mobility data for Germany. The impact of different charging strategies for a high market penetration of electric vehicles is analyzed considering the renewable energy production and the distribution grid of the city of Freiburg. If all cars were substituted by electric vehicles, the electrical energy demand would increase by a third. Load peaks and the capacity usage of electric installations depend strongly on the amount of power and the simultaneity of the charging process. Decentralized electric vehicle charging based on tariff incentives is one option to influence the charging behavior. In the Freiburg area the residual grid load was adjusted by shifting the charging time to periods with high renewable energy production or low electric energy consumption. Another important aspect of this study is the development and realization of a pilot system for tariff incentive based load shifting. The so called "mobile Dispatcher" is principally used for the determination of the optimal charging strategy considering all relevant factors (e.g. user input data, time variable feedin tariffs, energy consumption tariffs and battery degradation costs), the communication and data exchange with the charging station, as well as with the energy providers. Prior to the development of the "mobile Dispatcher", concepts to connect the electric vehicle to the grid were evaluated, and necessary modifications of the electricity marked structure were discussed. Based on the goals of the German national development plan, different grid integration strategies, such as mobile and stationary metering concepts, have been compared. The charge planning of the onboard pilot system "mobile Dispatcher" is based on direct communication between the energy system, the electric vehicle and a mobile metering concept. Experiences from implemented and successfully operating tariff incentive based charging done by "mobile Dispatchers" with bidirectional energy flow in 20 Plug‐In hybrid cars are described. The "mobile Dispatcher", the grid integration strategies, the charging control based on variable tariffs as well as the analysis of the distribution grid are visionary studies for high market penetration of electric vehicles. But what are the existing options to link electrical cars with renewable energy production and which potential do they have in the near future? Both German feed‐in directives, the Renewable Energies Act (germ. EEG) and the Combined Heat and Power Generation Act (germ. KWKG) guarantee a higher compensation for decentralized generated energy that is consumed locally instead of fed into the public grid. In the context of an emerging Plug‐In vehicle market, the actual German legislation as well as the prognosis (decreasing PV‐ System costs, decreasing battery costs and increasing energy costs) open up the perspective of linking local renewable energies with the electric vehicles and enable new options for additional revenues for the local energy system. To address this, optimized operation strategies for Plug‐In vehicles and decentralized energy production within the Smart Home have been evaluated and exemplarily demonstrated in a row housing site located in Freiburg. The approach used in this study to evaluate the options is a model‐based optimization using mixed integer linear programming (MILP) algorithms. The simulation, considering technical operation parameters as well as costs and revenues, revealed a potential financial benefit for optimized local operation management. Within the simulated period (January to July) benefits increased 2100 C (which is 40% of the contribution margin) compared to a complete feed into the public grid. Further simulations show that these benefits will increase in the near future (2015 & 2020). Optimization functions are the core elements for the different examinations in this study. Besides the model‐based optimization using mixed integer linear programming (MILP), a combinatorial algorithm and an algorithm based on the graph theory have also been developed and adapted. In this study, tools, methods and concepts are described to establish a linkage between the energy demand of electric vehicles with fluctuating renewable energy generation today and in future. The studies have been done at Fraunhofer Institute for Solar Energy Systems ISE and supervised by Univ.‐Prof. Dr.‐Ing. habil. Christian Rehtanz (TU Dortmund)