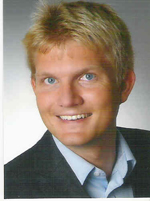 Toke Franke was born on June 18th, 1979 in Eckernförde, Germany.

He began his studies of Electrical Engineering with focus on power electronics and business administration in October 2001 at the Technical Faculty of the Christian-Albrechts-University of Kiel. During a four-month internship in Melbourne, Australia in 2005 he developed a complex test circuit for automated testing of industrial inverters. From 2003 to 2007 he worked alongside his studies as a student assistant at the Institute for Power Electronics and Electrical Drives. In 2007 he graduated at the same institute with his diploma thesis "Analysis, Design and investigation of a 20 kW Z-source inverter". Since mid of 2007 he worked at the same institute as a university lecture and defined the topic of his PhD project. The results of his diploma thesis he has presented on conferences in Rostock and Rhodes, Greece.

To assure the increasing demand of energy in times of simultaneously occurring decrease of fossil fuels, the use of alternative energies such as sun, wind and water is inevitable. Especially in case of solar energy, which can be transformed into electric energy via solar cells, the demand for high efficient converters is prominent. The converter's task is to alter the DC delivered by the solar modules into an alternating current for the national grid.

The intention of this PhD project is to further develop and to study innverters for solar plants. Thereby the enhancement of efficiency is predominant, while at the same time the construction volume, the weight, the life cycle costs and as possible the production costs are to be reduced. This is realized by the utilization of new power semiconductors made of silicon carbide (SiC). These power semiconductors are in the state of pre-commercial development.

To the operating converter fitting control concepts for the maximum power point tracking and for the input into the national grid are implemented. The intention is to maintain all relevant norms especially in regard to the behavior on the grid-side.